I’ve always thought using a cast iron pan on a day to day basis is hard and time consuming. This, despite me having watched my Grandma use several cast iron pans for her cooking on a daily basis.

And whenever someone bought a new iron pan from Sandhai and requested her with “Pazhagi kundunga” (season this), she was happy to do so and gave it back to them after seasoning telling them, “sonnaaa sonna madhiri varum” which translates roughly to “the pan will obey your command”.

Last year this time around, my friend’s hubby lugged few Lodge cast iron pans for her, her mom and me all the way from US. I cooked in it once and since I had ligament tear in my elbow following an accident, I was unable to handle the weight of the pan, so quietly kept it aside.

After 3 months, when I took it out to cook I was horrified to see several rust spots inside the pan. Obviously, I had not dried it properly before storing and considering that it was an Iron pan, it had started to rust.

I panicked and searched online to restore the pan back to its original glory. Almost several sites suggested to bake the pan in the oven for almost an hour to season it after removing the rust. 1 hour… but why and moreover how will people who do not have an oven get to restore it?

And most importantly, I do not remember my grandma using an oven to season the pans. She did not even have an oven in the first place. All she had was 2 stoves that used wood and charcoal as fuel and a kerosene stove.

I recalled what she used to do with the pans and decided to apply the same thing to my cast iron pan and check if it works or not and it did, fabulously so. After that I started following the same procedure every fortnight to reseason my pan and keep it in top shape.

During such a time, last month when I had asked my Instagram peeps, if they would like to know how to season the pan, a whopping 99% of them voted “Yes”. But since I had already seasoned the pan, I did not want to take a video of seasoning an already well seasoned pan which sounded lame. So I had to let the pan rust first to shoot a video that showed the proper results.

How to Remove Rust and Season a Cast Iron Pan:

The following video shows how to restore and season an already seasoned pan. Remember that the Lodge Cast Iron pans comes pre seasoned and they are ready to use immediately as soon as you bring it home.

To remove rust, you will need:

If your pan is heavily rusted, the first step is to rinse the pan. Sprinkle rock salt generously and scrub well with a steel wool scrubber. Rinse. Repeat this 2 more times, till the rust is completely gone. Now squeeze some dish wash detergent and scour well and rinse. Repeat this twice or till the water runs clear. If the outside of the pan is rusty, apply the same treatment to the outside area as well.

If your pan is lightly rusted like mine was, (the bottom surface was smooth but only the sides were rusty), skip the rock salt treatment, just scrub well with dish wash detergent twice or thrice till the rust is gone and the water runs clear. If the outside of the pan is rusty, apply the same treatment to the outside area as well.

How to Season a Cast Iron Pan:

Here is a “Before” and “After” Picture of the cast iron pan. 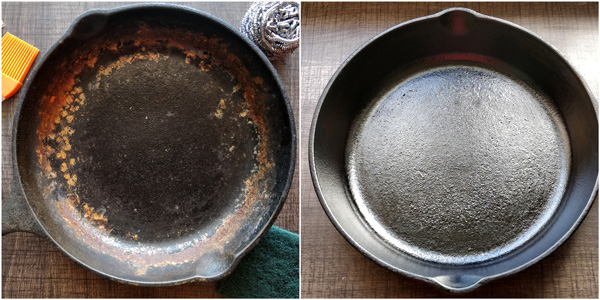 How to Maintain the seasoning of the cast iron pan:

So, you have successfully removed the rust off the cast iron pan, seasoned it well and ready to cook in it. But how to maintain it daily. This is what I do.

Once I have finished cooking in the pan, I immediately transfer the contents to a bowl, rinse the pan under running water. If there are any food particles sticking to the pan, I gently scrub using a fibre scrub pad.

I do not use any dish wash detergent. Rinse the pan and place it on the stove with the flame on high. Once it is dry, I switch off the stove and leave it as such. I do not apply oil once dry on a daily basis. But do so, if you do not want to reseason the pan.

But every fortnight, I scrub off all the oil build up by scrubbing the pan with liquid detergent and follow the steps I mentioned under “How to season a cast iron pan”.

How to Season an Unseasoned New Cast Iron Pan:

As I was really happy with how well and easily I can care for my lodge cast iron pan, I bought a new cast iron tawa in a Metal Expo which I attended with my husband.

It was a 12 inch tawa which I bought for a song and I couldn’t wait to start making dosas in it. But it was an unseasoned pan and it had to be seasoned properly before I could use.

What you will need:

After the pan is seasoned, you can start making dosas right away. But make sure that you make the first 2 or 3 dosas, slightly thicker (like an uttappam or pancake) and take care not to spread it around too much. After that batch, you are good to go.