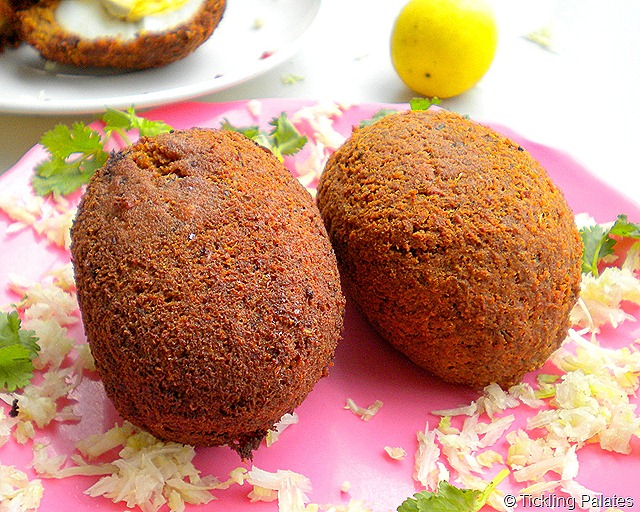 After a great trip around the world, We chose to go desi this month by opting for a wonderful appetizers namely, The Kebabs. Every month cooking especially for the group is creating a lot of buzz among my friends circle as they keep asking me if the theme has been decided and what am I gonna cook for that. When we chose the theme I had decided to make something with Soya chunks but had no particular recipe in mind but it is my friend who decided this Nargisi Kebab for me. Though this kebab is basically made with cooked minced meat, I chose to do it the vegetarian way but replacing them with soya chunks and Oh boy!!! the aroma and flavor was splendid that my neighbors came knocking on the door. 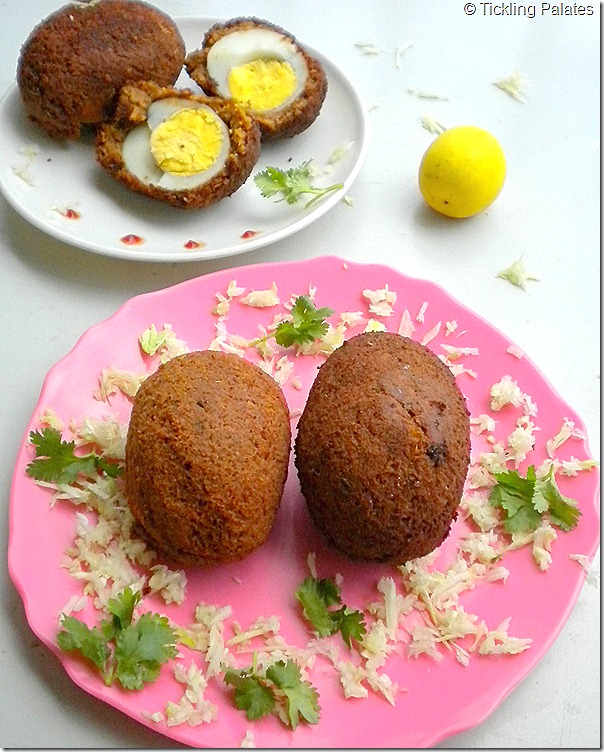 This will make a very good appetizer is any party circle and your efforts will be much lauded as mine were. How the kebabs came into existence made a very good reading and it only proved my belief that men are more imaginative and better cooks when compared to their counterparts. The kebabs came from the middle east when the soldiers involved in war fare decided to cook freshly hunted chunks of meat and vegetables on open fire along with some spices thrown in whenever the memory of good home cooked food struck them. The desi version is called as “Tikka” which is basically a vegetarian preparation of the Kebabs. Now-a-days both “Tikkas” and “Kebabs” are used in general terms. 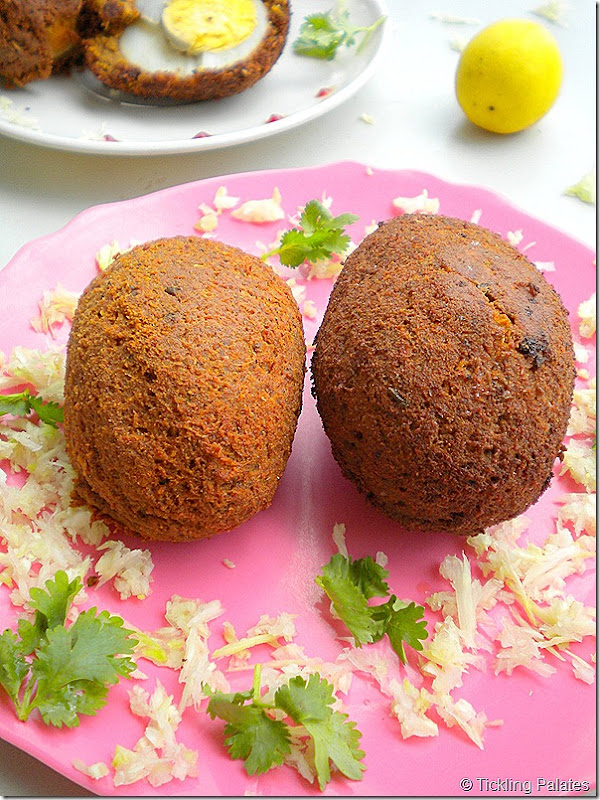 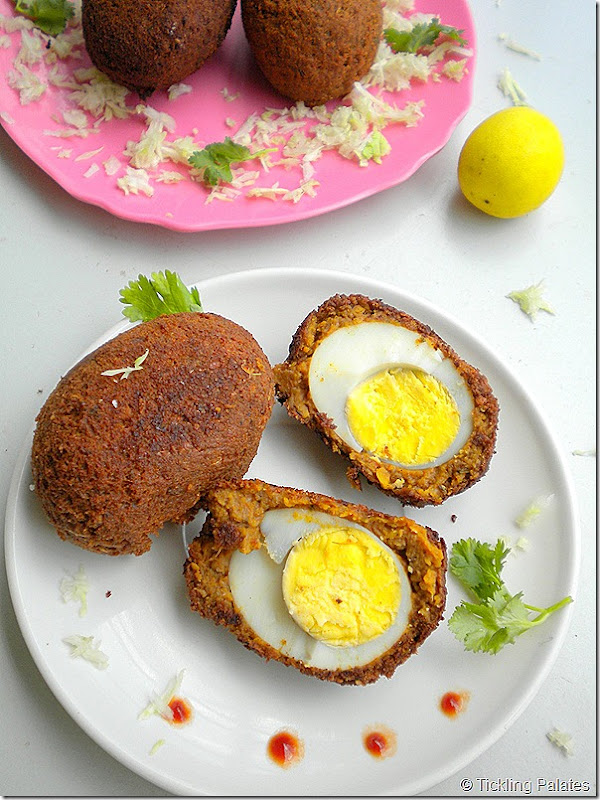 Heat 3 to 4 cups of water in a deep pan. Add cinnamon, cloves and cardamom and bring to a boil. Now add the soya chunks and let it cook over high flame for 2-3 mins. Switch off stove and close the pan with a lid. Leave it for 10-15 mins. You can see that they have doubled in size.
Tip the pan into a colander and discard the water. Take handful of soya chunks and squeeze well to get rid of excess water and proceed with the entire soya chunks. Do not discard the whole spices and keep aside.
Soak channa dal/bengal gram for an hour and pressure cook in enough water till soft. Strain away excess water and keep it aside.
Place the soya chunks along with whole spices, cooked channa dal, mint leaves, ginger garlic paste, cumin seeds, fennel seeds, turmeric powder, red chilli powder, black pepper powder, garam masala powder, salt in a mixer jar and pulse till they become coarse. Do not add any water.
Break open the egg, if using, into the jar and grind well once again till the entire mixture comes together into a soft lump. Scrape the sides with a spoon to grind evenly. Transfer the ground paste into a bowl.
Cover each hard boiled egg with the ground paste. The egg should be completely and well covered with the paste. Refrigerate for at least 1 or 2 hours.
Heat oil in a deep pan. when sufficiently hot drop the stuffed kebab one at a time and cook till golden brown and crisp. Drain on an absorbent paper and serve the kebabs hot with lemon wedges.
I avoided the hard boiled eggs for me an my friend and used paneer cubes instead. Jenny dear, I know you loved it and would love to gorge on it once more. So get me what you promised and you are on... 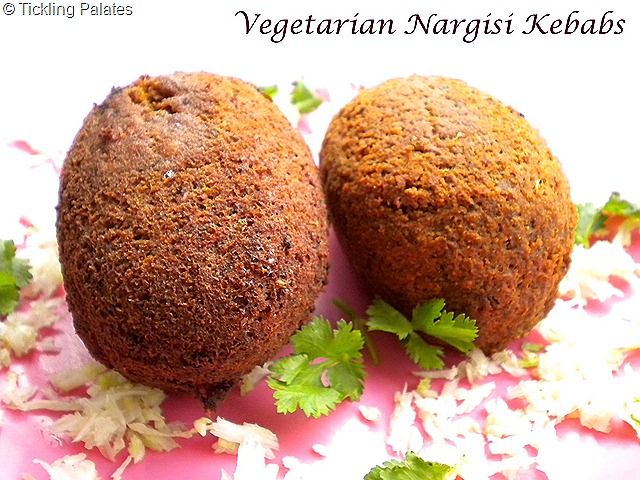 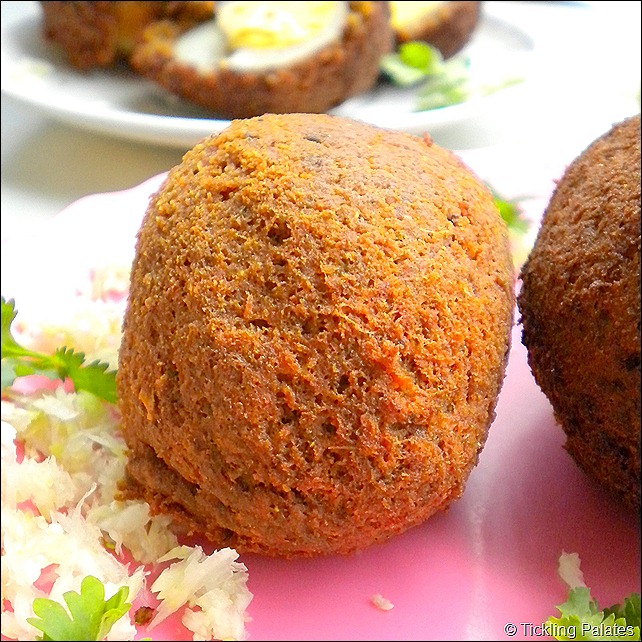 GO TO RECIPE INDEX
We use cookies to ensure that we give you the best experience on our website. If you continue to use this site we will assume that you are happy with it.OkPrivacy policy