1 shares
Arjun happily returned home on Saturday after a week of staying alone with his grandparents for the first time. He felt very proud that he did not ask and cry for Daddy or mummy. Though I felt sad when he left I felt quite happy and proud that he behaved himself and didn’t create any problems during his stay. I was going thru my emails when he returned on Saturday and all of a sudden he asked me whether I had posted any soups in the blog during his absence and I said no. Though I make soups often and have lots of them in my drafts I wonder why I never got around to posting them. As this will be my first blog on soups I did not want to post any from the drafts and wanted make a new one.

Contrary to last week’s MET Department’s forecast that there will be a three week delay in the starting of monsoon, it has been raining since Saturday night which makes a pleasant change after the scorching heat. May be the rain God took pity on us. What better time to make soup and enjoy the weather. This was the decent shot that I could manage before being carried off to the table as we had some family friends while I was making this soup. They enjoyed it very much.
The first time I made this recipe was seven years back which I got from a monthly magazine. I followed the instruction to the T and the result was that you should have seen my Hubby’s face after he took a sip. He said that it tasted like more like a kashayam than a soup and smelled of raw coriander. It was a lesson that I would never forget that not to follow instructions blindly but to imagine it in my mind and be sure whether it would really work out. Since then I had made some changes to this recipe till it tasted right and it is now a keeper and the most often requested one in my house hold.
Coriander and Carrot soup 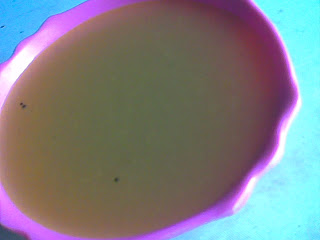 Ingredients:
Coriander leaves with the stalk– ½ bunch
Carrot, big - 1
Toor Dal – 2 tbsp
Onion, small – 1
Green chili, slit lengthwise – 1 (optional)
Ginger – 1 small piece
Garlic – 2 pods
Aji-no-moto – ½ tsp
Salt – to taste
Oil – ½ tsp
Water – 3 cups
Whole spices
Coriander seeds – 1 tsp
Cumin seeds – ½ tsp
Pepper – ¼ tsp
Bay leaf – 1
Method:
Clean and wash the coriander leaves and chop them roughly. Chop the carrots and onions roughly. Crush the whole spices roughly except the bay leaf.
In a pressure pan heat the oil and add the onions. Saute for aminute and now add the carrots and coriander leaves and sauté them just for a few seconds till the coriander leaves shrink in their size. Now add the toor dal and 2 cups of water.
In a soup bag or a piece of clean white cloth place the crushed whole spices along with bay leaf, ginger, garlic and green chili and tie them into a bag and place this bag into the cooker. Close the cooker and cook in a medium flame for 3 whistles. Wait and open after the pressure gets released.
Take out the soup bag and squeeze out well and put it away. Pour the contents in a liquidizer and blend them well. Strain the blended mush through a strainer.
Place the strained soup in a pot. Add one more cup of water, aji-no-moto, salt and reheat for two minutes, sprinkle more pepper powder if you want and serve piping hot.
The addition of toor dal gives the soup more body and good texture. Keep this hot and spicy soup as your company on a rainy day and you won’t feel like asking for more.
This soup is off to Siri’s Herb Mania: Coriander started by Ammalu's Kitchen
and to Divya's Diet Foods

GO TO RECIPE INDEX
We use cookies to ensure that we give you the best experience on our website. If you continue to use this site we will assume that you are happy with it.OkPrivacy policy